Did you know that all new Directors now need a Director Identification Number?

Take note - the Director Identification Number (“DIN”) system is now in place. This new system has been coming for some time, and the transitional arrangements have ended. All new directors now need a DIN.

The DIN system has been designed to provide the public greater transparency over who is running which companies. Given the recent market volatility and financial stress caused by the pandemic, there are heightened risks of mismanagement, whether by circumstance or deliberate acts, which can cause real damage to the broader public. The DIN system has been created to reduce the risks of fraudulent or illegal activity, whether that be by using fictitious identities to act as a Director or by engaging in schemes such as illegal phoenix activity.

At BRI Ferrier, we have encountered a variety of matters where suppliers and customers have lost significant sums when their dealings with the particular entity turned sour, and it is only later when they seek to recover their funds that they learn the registered Director was a ‘person of straw’ or a repeat offender of failed and phoenix activity.

To put this in context, in 2018 the ATO estimated that the economy-wide annual cost of illegal ‘phoenix’ activity was between $1.8 billion and $3.2 billion. Recent market conditions indicate that the current figures could be far worse, having regard to record levels of tax debts which the ATO are now beginning to call up, substantial increases in supply-chain costs and prospects of interest rates rises.

In short, it is TIME TO ACT for existing and new directors. The regime is being administered by ASIC and process of registering is relatively simple. That said, failure to comply can trigger quite severe penalties from ASIC, especially if it is seen to be deliberate.

Improved knowledge in the marketplace creates comfort and mitigates commercial risks. If you or your clients have concerns about one of your suppliers or customers, the DIN system will should give you greater insight as to who you are dealing with. You can use this information to check public registers of other ventures that person is or was involved with, before engaging further.

If you or your clients need assistance, please contact us at BRI Ferrier.

More information can be found on the ASIC and ABRS websites. 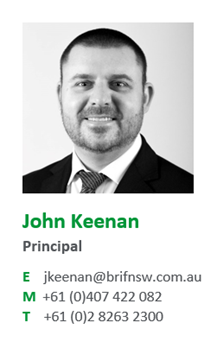